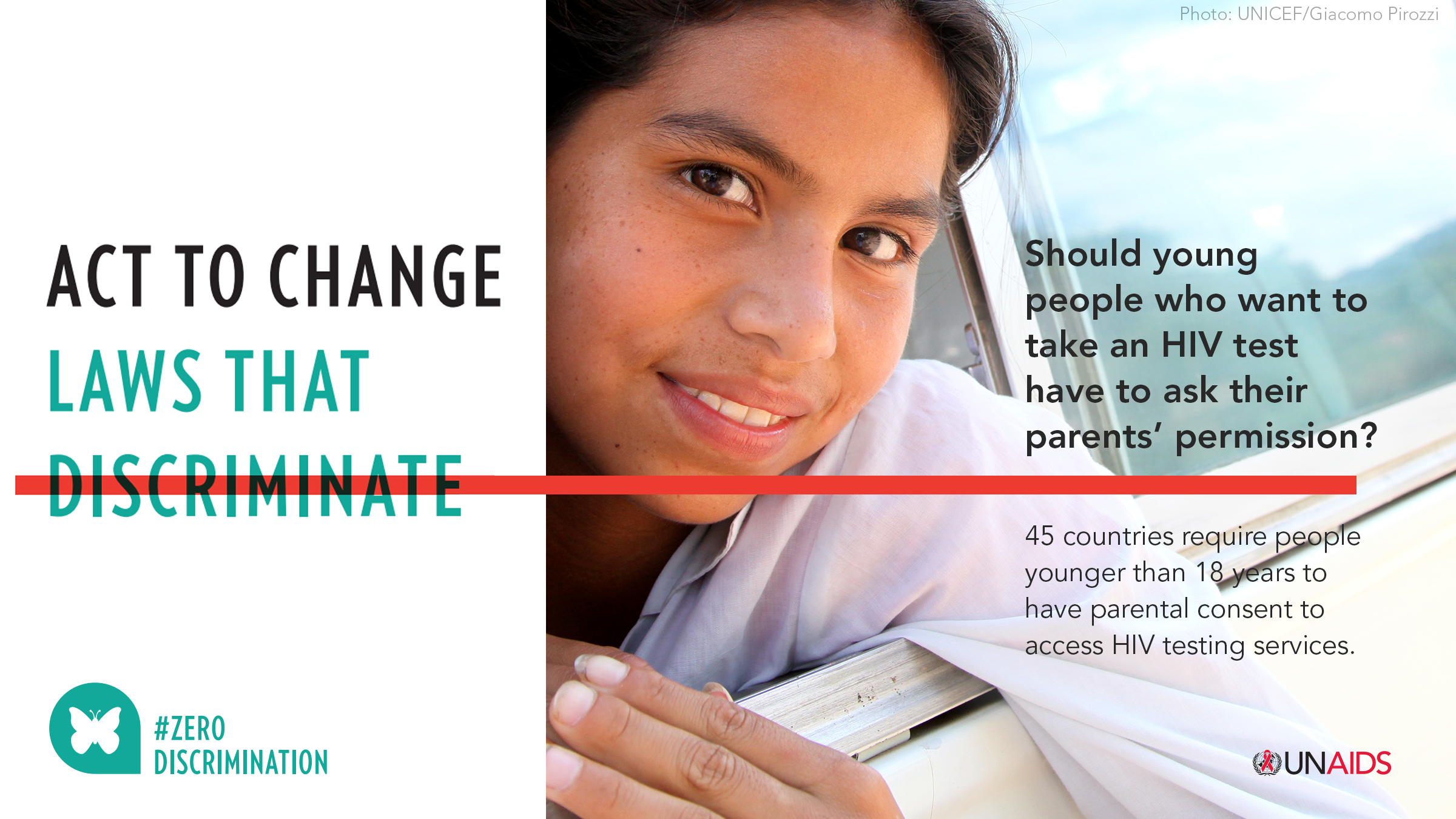 On March 1, UNAIDS observed Zero Discrimination Day, highlighting the need to take action against laws and policies that discriminate against PLHIV. Ending the epidemic cannot happen without addressing HIV-related stigma in our hospitals, in our communities, and in our laws. CHLP Executive Director Catherine Hanssens authored the blog “On Zero Discrimination Day, CHLP joins UNAIDS Call to Action to Change Discriminatory Laws,” addressing HIV criminal law reform in America and the related imperative for concrete measures that reduce housing insecurity, inaccessible education, unemployment and income inequities, and government “solutions” that, like criminalization, penalize poverty, race, gender, disability and other identities outside the mainstream.

Arkansas
After a trial judge rejected the argument that Arkansas' HIV criminal law is unconstitutional last July, Sanjay Johnson accepted a plea deal in February 2019 placing him on probation for five years and requiring that he pay a fine of $750, ending the case and the risk of imprisonment. Arrests and prosecutions of other people of color living with HIV continue.

Meetings to plan a public education and law reform strategy are held on the second Thursday of the month at 11:00 AM (CT). If you are interested in supporting HIV criminal reform efforts in Arkansas, please contact Jada Hicks at jhicks@hivlawandpolicy.org.

Florida
In February, Florida’s HB 79 passed the House Criminal Justice Subcommittee and in March it passed the House Appropriations Committee with the help of bill sponsor Rep. Duran (D-112). An identical bill, SB 846, has been filed by Sen. Pizzo (D-38) but has not been scheduled for a committee hearing. HB 79 and SB 846 are essentially identical to last year’s HIV criminal law reform bills SB 546 and HB 719. CHLP’s analysis of those bills is here.

HB 79 incorporates HIV with other STIs under a different portion of the Florida code, § 384.24. Some of the improvements and related concerns in the bill include:

The unique penalties faced by sex workers living with HIV in Florida that the bill fails to address are:

The Williams Institute report HIV Criminalization in Florida shows that sex workers experience the greatest harm from HIV criminal laws, concluding that "sex workers are being treated much more harshly in the context of HIV criminalization laws in Florida than others engaging in activity that could potentially expose an individual to HIV."

Florida HIV Justice Coalition Meetings are held on the third Thursday of the month at 1:00 PM (ET). If you are interested in supporting HIV criminal law reform efforts in Florida, please contact Kamaria Laffrey at kamaria.laffrey@seroproject.com.

Idaho Coalition for HIV Health and Safety
If you are interested in supporting ongoing efforts by Idaho advocates, please contact Kevin Lish at kevin.lish@allunderoneroof.org for additional information.

Indiana
In February 2019, the House of Representatives unanimously approved Indiana HB1325 that would make significant changes to Indiana's communicable disease transmission statute. It was assigned for a hearing in the Senate Public Health Committee. After hearing testimony, the Committee Chair decided to forgo a vote due to member concerns and instead will take the bill to a conference committee to see if the language could be incorporated into another bill moving forward. This bill would correct several unsound HIV public health codes and repeal one related criminal code. Some of the changes include:

To learn more or to support local advocacy related to HB1325 and the Indiana HIV Modernization Movement contact Carrie Foote at foote@iupui.edu.

Louisiana Coalition on Criminalization and Health
Regular advocacy planning teleconferences are held on the second Wednesday of the month at 11:00 AM (CT). If you are interested in information about HIV criminalization in Louisiana or joining the LCCH, please contact Chip Eakins at ceakins@philadelphiacenter.org.

Michigan
A mix of good and not so good changes in Michigan's HIV law went into effect earlier in 2019. We will be posting an update to Michigan's law in our online Sourcebook and on our Michigan state page shortly. For information, please contact Jada Hicks at jhicks@hivlawandpolicy.org.

Missouri
In February, HB 166 (Rep. McCreery) and HB 167 (Rep. Rehder) were heard by the Health and Mental Health Policy Committee. The bills are similar to bills filed last year when the coalition was an integral part of their drafting. CHLP worked with advocates to edit proposed bill language, analyze the impact of the bills, and help prepare for committee hearings. Coalition members testified before the committee about their experiences as PLHIV and why the laws should be reformed. MO HIV Justice Coalition advocate, Devin Hursey, testified to the committee about his "professional experience working with people living with HIV, and the way that HIV criminalization laws interfere with treatment adherence," and told his "story of receiving an HIV diagnosis as a college student."

Generally speaking, reform of Missouri's HIV criminal law enjoys wide-ranging support among a range of stakeholders. In early March 2019, state representative Dr. Jim Neely (R-Cameron) wrote a guest column in the St. Joseph News-Press about the pending bills. "What saves lives is access to care and effective medical intervention," he wrote, "It is with these tools that we will end HIV/AIDS, not through criminalization."

Late last week, a House committee released a substituted version of HB 167; hearings are scheduled for this week. While some provisions clearly improve current law (e.g., providing defendants the option of maintaining the confidentiality of their identity and HIV status), the substitute bill also excludes defenses such as condom use or medical regimens that would support the lack of intent to transmit HIV, and would create serious new felonies for people living with other stigmatized diseases, such as all forms of viral hepatitis.

Missouri HIV Justice Coalition meetings are held on the second Friday of the month at 1:00 PM (CT). If you are interested in working with the coalition, please contact Ashley Quinn at ashley@empowermissouri.org, or visit the coalition’s website for more information.

Ohio
The Ohio Health Modernization Movement held a day-long HIV summit on April 6 in Columbus. The annual summit provided an update on recent coalition organization work, lessons from the legislative process in other states, and a review of educational materials (including our latest bill proposals drafted with Equality Ohio) and focus for 2019.

Southern HIV Decriminalization Network
Meetings are held on the fourth Thursday of the month at 3:00 PM (ET). If you would like information on HIV criminal law reform efforts in the South or are interested in becoming involved with the Southern HIV Decriminalization Network, please contact Charles Stephens at charles.stephens@counternarrative.org.

CHLP worked closely with lead stakeholders, including former CHLP staff member Lauren Fanning, on analysis and guidance on the draft language. Some of the significant changes proposed by the bill include repealing the felony for exposure and moving misdemeanor/gross misdemeanor from the criminal code to the public health code. The new language also importantly would require specific intent to infect another person with HIV.

Substitute House Bill 1551 passed out of the House Health and Wellness Committee and the Rules Committee and was referred to the House but failed to reach the floor for a vote and will not be reconsidered this legislative session.