On October 18, Florida State Senator René García (R-Hialeah) filed SB546: Transmission of Disease Through Bodily Fluids. (Senator García introduced a similar bill during Florida’s last legislative session, which ultimately died in the Health Policy Committee in May 2017.) On November 16, an identical bill, HB719, was filed in the Florida House of Representatives by Rep. Nick Duran (D-Miami).

The bill makes a range of changes to multiple sections of Florida’s law. This explanation will briefly describe current Florida law, followed by an explanation in italics of the changes that would be enacted under the bill.

Currently, it is a third-degree felony for a person living with HIV (PLHIV) to have “sexual intercourse” without disclosing their status. Under a different section of the same law (§ 384.24), it is a first-degree misdemeanor for a person who has any one of a number of STIs[1] to have sex without disclosure.

The bill would incorporate HIV with other STIs under § 384.24. Rather than hinging on non-disclosure alone, this offense would now require intent to transmit, conduct that poses a “substantial risk of transmission,” and actual transmission[2] in order for a person to be prosecuted. The revision would retain the first-degree misdemeanor punishment.

The bill also protects any person who “in good faith complies with a treatment regimen” or with “the behavioral recommendations of [a] health care provider or public health officials” by providing that said compliance negates the specific intent to transmit required for prosecution under the law.

The bill expands the scope of potentially criminal activity from“sexual intercourse” to “sexual conduct,” which, in addition to penetrative sex, includes oral sex (mouth contact with a penis, vagina, or anus).

Under current Florida law, it a felony for a PLHIV to “commit or offer to commit prostitution” or “procure[] another for prostitution” when that person has been advised of their HIV positive status and informed that it is possible to transmit to another person through sexual activity. This provision tacks on significant punishment to what is ordinarily a second-degree misdemeanor for first-time offenders, punishable by a maximum of 60 days in jail. A PLHIV may be charged with an additional third-degree felony, punished by up to 5 years of incarceration.

Individuals convicted of prostitution are also required to undergo mandatory STD screening. Those who test positive must submit to treatment and counseling prior to release from probation, community control, or incarceration.

It is a standalone misdemeanor for a person who has tested positive for an STI[5] other than HIV, been informed of their status, and advised about the possibility of sexual transmission, to engage in prostitution or procurement of prostitution.

The bill leaves these provisions of Florida law untouched.

Currently, it is a third-degree felony for a PLHIV to donate blood, plasma, organs, skin, or other human tissue when that person knows their status and has been informed that transmission can occur via such donation.

The bill would reduce the penalty for donation by a PLHIV to a misdemeanor rather than a felony and creates an exception for when such donation is deemed medically appropriate by a doctor.

Additional Felony Penalties for HIV Exposure After a Previous Conviction

Under current Florida law, PLHIV may face additional felony penalties for committing or attempting to commit particular types of crimes after a previous conviction for a similar offense. [3] Under Florida law, a person is subject to mandatory HIV testing if they are convicted of, plead guilty to, or plead no contest to an offense or attempted offense involving the transmission of bodily fluids, i.e., the over a dozen sex-based or assault/battery offenses that are listed in the statute, § 775.0877(1).[4] If a person tests positive for HIV, is informed of those results, and subsequently commits another one of the offenses listed in § 775.0877(1), they are guilty of an additional felony, punishable by up to five years in prison and/or a $5,000 fine. A person may be tried, convicted, and sentenced for both the underlying crime and for a violation of this provision.

The proposed bill lowers the punishment from felony to misdemeanor for PLHIV who have a prior conviction for one of the enumerated offenses in § 775.0877(1) and subsequently recommit the same or a similar offense identified in the statute. It would also remove donation of blood, plasma, organs, etc., (the crime described in the preceding section) from the list of included offenses.

[2] As discussed below, however 1) those convicted of certain types of “sex offenses” and subject to mandatory HIV testing can be prosecuted for mere exposure under a different section of Florida’s law if they tested positive and then commit the same type of offense; and 2) sex workers who know they are HIV positive are still treated as felons for any form of solicitation, regardless of contact or transmission.

[3] Although this statute, § 775.0877(1), is entitled “Criminal Transmission of HIV,” actual transmission is not a required element of the offense. That aspect of the statute is unchanged under the bill. 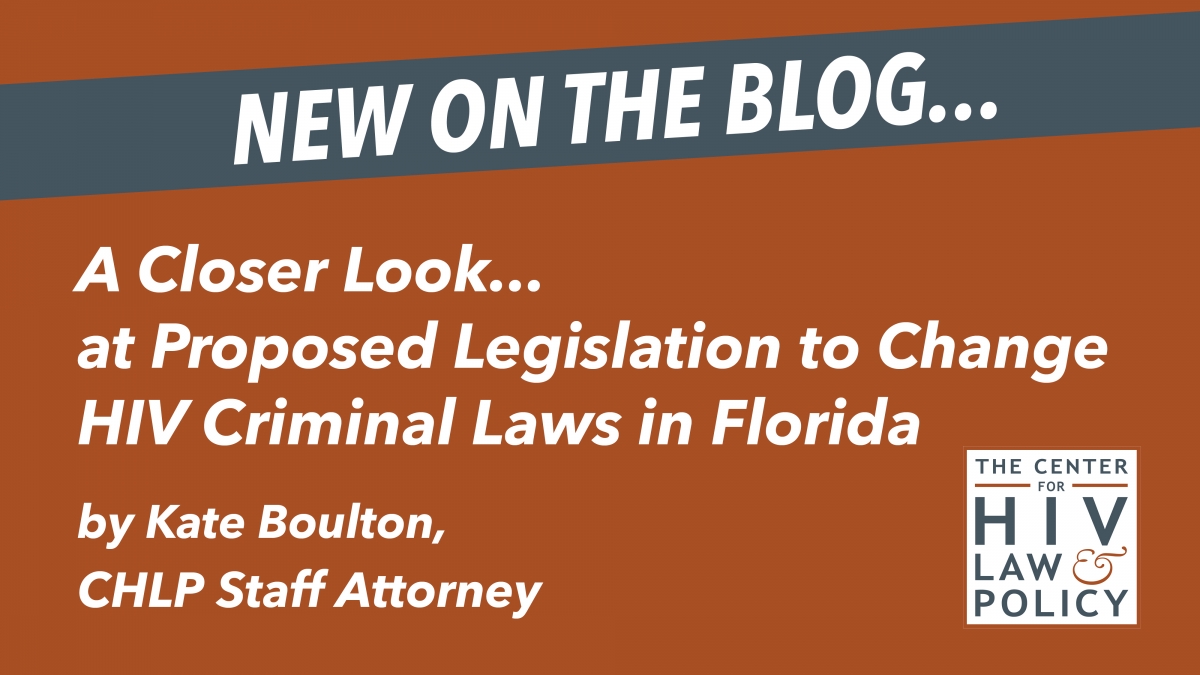