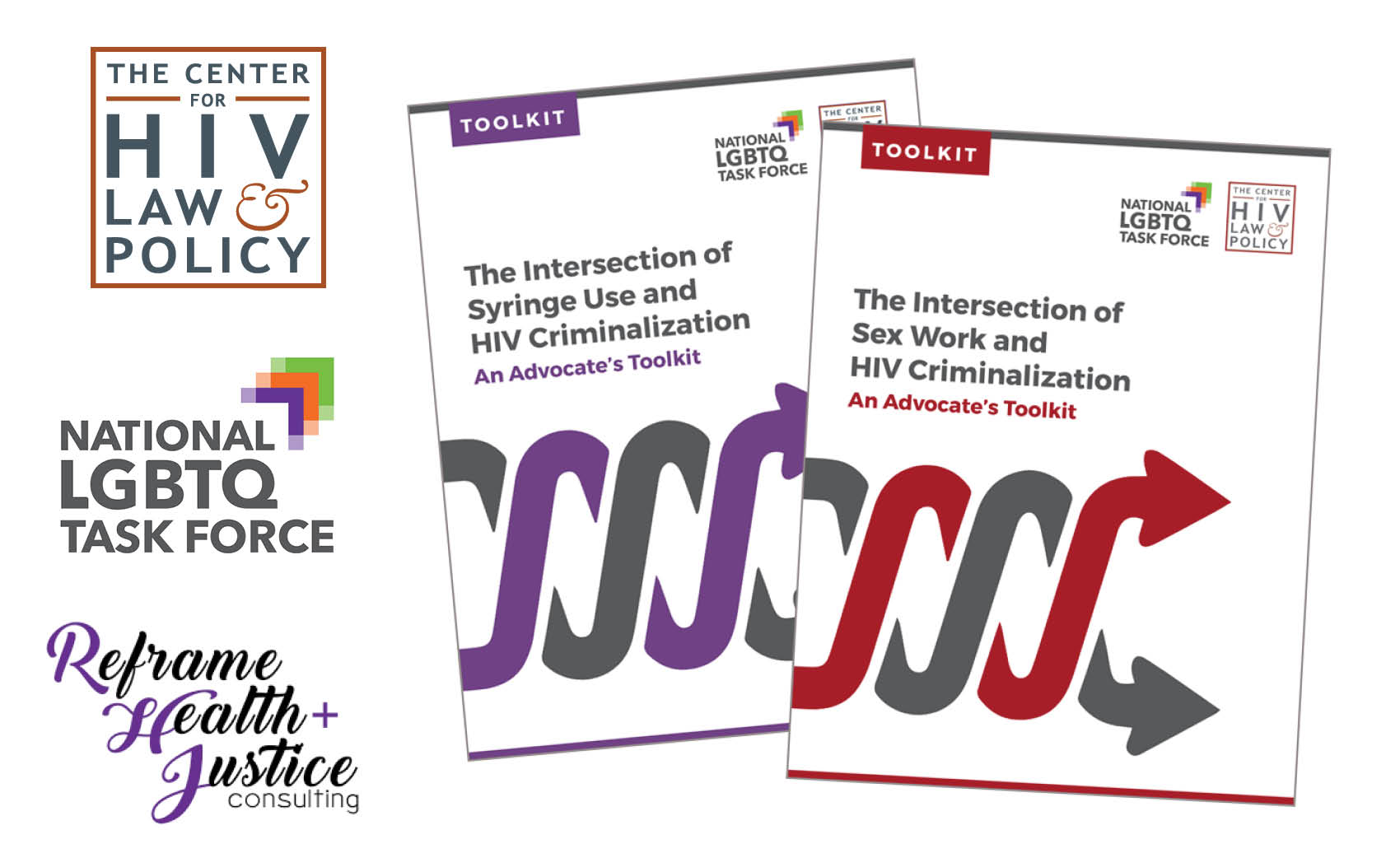 November 15, CHLP, the National LGBTQ Task Force, and Reframe Health and Justice Consulting co-sponsored a webinar to introduce the new resource, HIV Criminalization Beyond Non-Disclosure: Advocacy Toolkits on Intersections with Sex Work and Syringe Use. The toolkits highlight the intersections between advocacy for HIV criminal law reform, decriminalization of sex work, and safe syringe access. Led by presenters Sasanka Jinadasa and Kate D'Adamo from Reframe Health and Justice, Meghan Maury from the Task Force, and CHLP's Kate Boulton, the webinar introduced participants to these intersections and included a discussion of how advocates can use the toolkits most effectively. A recording of the webinar can be found here. The toolkits were released in September, a joint project of CHLP and the Task Force, to help foster more intersectional advocacy for HIV criminal law reform. Designed for advocates working to end the disproportionate criminalization of people living with HIV, the toolkits are located on both CHLP's website and the Task Force's website. To date, the toolkits have been endorsed by more than a dozen organizations, including Harm Reduction Coalition, Transgender Law Center, and the ESPLER Project. If your organization is interested in endorsing the toolkits, fill out this form or contact Kate Boulton,kboulton@hivlawandpolicy.org or Meghan Maury, mmaury@thetaskforce.org. 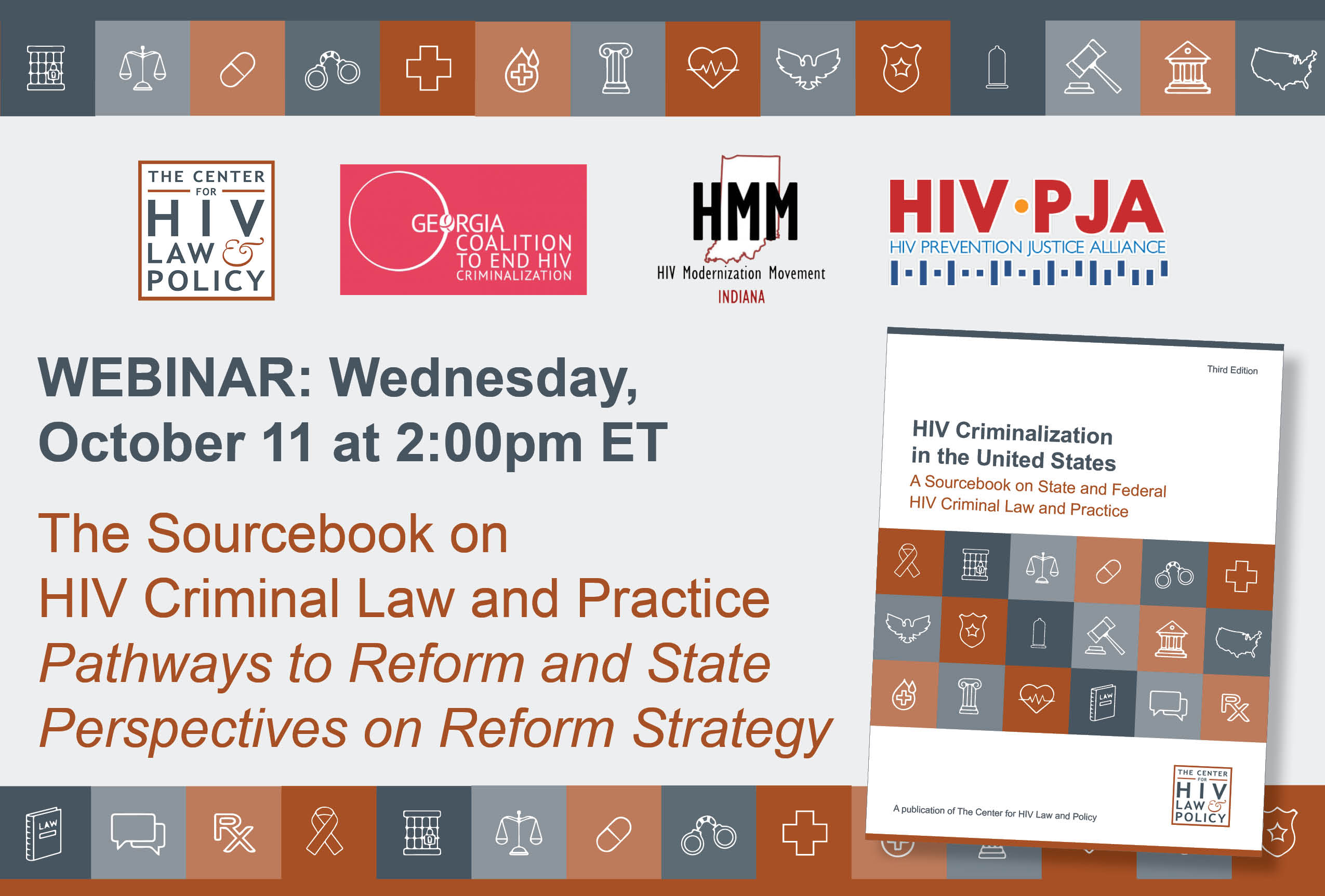 On October 11, CHLP partnered with theGeorgia Coalition to End HIV Criminalization,HIV Modernization Movement Indiana, and HIV Prevention Justice Alliance to present a webinar on CHLP’s newly released Sourcebook on State and Federal HIV Criminal Law and Practice and the most effective ways HIV criminal reform advocates can use the Sourcebook to inform and support their work. The webinar also included a discussion of different pathways to reform HIV criminal laws, some of the advantages and disadvantages of these different options, and key factors to consider in deciding on a reform strategy. Carrie Foote, Chair of HMM Indiana, and Sequoia Ayala, member of the Georgia Coalition to End HIV Criminalization, joined CHLP's Kate Boulton to speak about modernization efforts in their states, including some of the different factors influencing a reform strategy. A recording of the webinar can be found here.

ARKANSAS  On October 13, the Arkansas HIV Planning Group hosted a presentation by CHLP Staff Attorney Kate Boulton on HIV criminalization and the law in the state of Arkansas. The presentation included discussion of recent prosecutions in the state, as well as the advocacy landscape to reform these laws nationally. The audience included individuals from local AIDS service organizations, the Arkansas Department of Health, and a local law student. Those interested in getting more involved held an initial planning call on November 9 to begin discussions on how to build a movement for reform in the state. If you are interested in learning more about HIV criminalization in Arkansas, please contact Kate Boulton (kboulton@hivlawandpolicy.org).

SB 239 revises California law to treat transmission of HIV in the same way as intentional transmission of other serious communicable diseases. The modernized law also removes penalty enhancements for PLHIV in the sex trade—a crucial change in light of findings from the Williams Institute demonstrating that sex workers have borne the overwhelming brunt of HIV criminalization in California.

Click here for CHLP’s more detailed summary of the changes.

Californians for HIV Criminalization Reform is no longer holding regular meetings, but is focusing on community education and messaging around SB 239, as well as other HIV-related legislation and projects in the state of California.

FLORIDA
On October 18, Senator René García (R-Hialeah) filed SB546, a bill that makes several significant revisions to Florida’s HIV criminal laws. HIV is now included with other sexually transmitted infections, and the statute requires proof of intent to transmit and actual transmission. The penalty for a violation of the revised law is a misdemeanor, rather than a felony, which was uniquely applicable for HIV exposure. A previous version of the bill died in the Health Policy Committee in May. The new bill, however, expands the scope of potential criminal activity to include oral sex, and leaves intact singular and extreme penalties for sex workers living with HIV (in comparison, California's recently passed SB239 addresses such issues for sex workers). On November 15, an identical bill to SB546, HB719, was filed in the Florida House of Representatives by Rep. Nick Duran (D-Miami). For more on the details of the bill, read CHLP’s analysis here. Meetings are held on the third Thursday of the month at 1:00pm (ET).If you or your organization is interested in supporting HIV criminal reform efforts in Florida, please contact Kamaria Laffrey (kamaria.laffrey@seroproject.com)

GEORGIAThe Georgia Coalition to End HIV Criminalization held an in-person all-day convening on October 30. At the convening participants discussed the group’s internal structure and setting and agreeing on goals for 2018 and 2019. CHLP’s National Community Outreach Coordinator Arpita Appannagari traveled to Georgia to meet face-to-face with advocates and support the Coalition’s ongoing strategy and organizing.  On October 17, a Georgia House of Representatives study committee (created by HR 240) held a public hearing focused on HIV. The committee heard presentations from clinicians and public health officials, including information on why HIV criminal laws should be revisited. The hearing made national headlines, however, when Representative Betty Price suggested that quarantine may be a legally appropriate response to control PLHIV. Her statements were widely rebuked, and several members of the Georgia Coalition contributed to an op-ed that appeared in the The Hill. Meetings are held on the first Thursday of the month at 4:00pm (ET)  If you are interested in joining the Georgia Coalition to End HIV Criminalization, please contact Emily Brown (emily@georgiaequality.org) and visit the coalition’s website for additional information.

INDIANAAs noted above, HMM Indiana co-sponsored CHLP’s October webinarSourcebook on HIV Criminal Law, State Perspectives, and Reform Strategy, and HMM Chair Carrie Foote presented on the utility of the Sourcebookfrom a state-based advocacy perspective. HMM has also created a You Tube channel. To subscribe, click here. The Steering Committee will resume regular monthly meetings soon. Next meeting is TBD.  If you are interested in information about HIV criminalization or participating, supporting or endorsing HMM-Indiana, visit the website or contact Carrie Foote at foote@iupui.edu.

LOUISIANAThe Louisiana Coalition on Criminalization and Health (LCCH) convened in October and November. The Coalition divided into four sub-committees to focus on the development of a detailed workplan for the next legislative session.   Meetings are held on the second Wednesday of the month at 11:00am (CT). If you are interested in information about HIV criminalization or actively participating in LCCH, please contact Chip Eakins at ceakins@philadelphiacenter.org.

MISSOURIThe weekend of October 27, several members of The Missouri HIV Justice Coalition members attended the forum “Taking our Seat at the Table” in St. Louis and spoke about HIV criminalization. The Coalition convened in October and November to plan for state-wide training sessions and to identify potential stakeholders and allies within the legislature and public health community. Members of the coalition are also in discussions with several prospective bill sponsors about what advocates would like to see in a modernized law. Meetings are held on the fourth Friday of the month at 1:00pm (CT) via conference call. If you are interested in becoming an advocate with the Missouri HIV Justice Coalition, please contact Ashley Quinn at ashley@empowermissouri.org, and visit the coalition’swebsite for additional information.

OHIOHealth Modernization Movement Ohio is working with Equality Ohio to plan a face-to-face convening for state advocates in February. Several members of the group are also meeting with a state legislator who served on the Criminal Justice Recodification Committee to discuss their goals in light of the final recommendations from the committee and why the current law needs to change. The Coalition convened in September and November to focus on developing a strategic response the decision from the Ohio Supreme Court in State of Ohio v. Batista (see analysis in Criminal Case Updates below). Meetings are held on the second Wednesday of the month at 5:00pm (ET).  If you would like information on HIV Criminalization or are interested in becoming an advocate with the Ohio Health Modernization Movement, please contact Arpita Appannagari at aappannagari@hivlawandpolicy.org.

TENNESSEEPJP Tennessee Working Group members continue to travel around state and engage in community education and advocacy. The group also convened October and November to refine a draft bill and to update their legislative strategy. Meetings are held on the fourth Thursday of the month at 1:00pm (CT). If you would like information on HIV criminalization or are interested in becoming an advocate with the PJP TN Working Group, please contact Arpita Appannagari ataappannagari@hivlawandpolicy.org.

OHIOOn October 26, the Ohio Supreme Court affirmed Orlando Batista’s conviction for felonious assault under R.C. 2903.11(B)(1), which makes it a serious crime for a person living with HIV to have sex without first disclosing their status to a sexual partner. The Ohio Supreme Court concluded that Ohio’s HIV felonious assault law regulates conduct, not speech, and therefore does not violate Batista’s rights under the First Amendment of the U.S. Constitution. The Court also rejected Batista’s Equal Protection claim that the law unfairly discriminates against people living with HIV because it concluded that the statute bears a rational relationship to the legitimate government interest of “curbing HIV transmission to sexual partners who may not be aware of the risk.” A detailed analysis of the decision, the facts of the case, and CHLP’s and other organizations involvement, can be found here. If you are aware of anyone charged in an HIV exposure or transmission case, please refer them to our website, www.hivlawandpolicy.org and/or have them or their lawyer, contact CHLP for assistance at 212-430-6733 or pjp@hivlawandpolicy.org.