By Kate Boulton CHLP Staff Attorney
Changes to HIV criminalization laws in Canada highlight the importance of the Consensus Statement on HIV TasP in Criminal Law Reform urging that prosecutions not hinge on an individual's viral load but on actual, intentional transmission.

Highlights importance of Consensus Statement urging that prosecutions not hinge on viral load but on actual, intentional transmission

Earlier this month Ontario Attorney General Yasir Naqvi and Health Minister Eric Hoskins issued a joint statement announcing that Crown Attorneys will no longer prosecute cases of HIV non-disclosure where the person living with HIV has had a suppressed viral load for at least six months. Their rationale is that “HIV should be considered through a public health lens, rather than a criminal justice one, whenever possible.”

The statement occurred in tandem with the release of a report by the Canadian Department of Justice calling for a significant shift in the way cases of HIV non-disclosure are treated by the Canadian criminal justice system. The report concludes that criminal liability should not apply in instances where a person was on treatment, where a condom was used, or in cases of oral sex because these circumstances do not pose “a realistic possibility of transmission.”

Of course it makes sense to acknowledge that any move to reduce the number of prosecutions for HIV non-disclosure in Canada is a good thing. That said, the Ontario AG and Health Minister’s announcement does not go nearly far enough; it suggests that the appropriate “public health lens” is simply to narrow the discriminatory criminal legal system targeting of people living with HIV to those without effective health care.

The Consensus Statement on HIV “Treatment as Prevention” in Criminal Law Reform outlines how reliance on viral detectability in HIV criminal law reform efforts poses a number of harmful, if unintended, consequences:

National HIV data in Canada illustrate the problem this approach poses for nearly half of all Canadian PLHIV. At the end of 2014, just over half (54%) of the estimated total PLHIV in Canada were virally suppressed.[1]

Regardless of the country, HIV law and policies must reflect the hard fact that disparities in access to treatment and the ability to reach long-term viral suppression inevitably interact with disparities in the criminal legal system. The synergy between these two discriminatory and deeply unequal systems will result in compounded harm for communities that are already disproportionately affected by HIV criminalization:[2] sexual and gender minorities,[3] Indigenous communities,[4] individuals experiencing poverty or homelessness, people who use drugs,[5] sex workers,[6] and people of color.[7]

Staff from the Canadian HIV/AIDS Legal Network have also flagged this tension, writing in a June 2017 blog post that advocates must be mindful of how new scientific advancements are incorporated into HIV criminal reform efforts:

While a growing body of research provides further evidence to consider when determining what constitutes a “realistic possibility of HIV transmission,” advocacy concerning cases of HIV non-disclosure must be informed by the unique challenges that marginalized groups living with HIV face in attaining undetectable status, so that the criminal law does not reproduce further inequities. Advocates must also acknowledge that the criminalization of people living with HIV has a negative impact on public health, regardless of viral load. Without laws and policies to ensure the removal of all barriers to HIV prevention and treatment, new scientific discoveries and their role in the courts may leave disparities between people living with HIV intact — or ultimately, do more to perpetuate them.

The Center for HIV Law & Policy welcomes Canada’s efforts to move away from the discriminatory and harmful criminalization of PLHIV. But Canadians deserve a more just, inclusive, and transformational conception of HIV criminal law reform that leaves no one behind, and which does not serve to reproduce and entrench inequalities in the public health and criminal legal systems.

More resources can be found on our website: www.hivlawandpolicy.org and at www.hivtaspcrimlaw.org

[1] https://www.canada.ca/en/public-health/services/publications/diseases-conditions/summary-measuring-canada-progress-90-90-90-hiv-targets.html  (As of 2014, approximately 80% of PLHIV in Canada were diagnosed. 76% of those diagnosed were receiving ARV treatment, 89% of whom were virally suppressed).  See also Peter Rebeiro et al., Sex, Race and HIV Risk Disparities in Discontinuity of HIV Care After Antiretroviral Therapy Initiation in the United States and Canada, 31 AIDS Patient Care & STDs 129 (2017).

[7] http://online.liebertpub.com/doi/abs/10.1089/apc.2016.0178; http://www.accho.ca/portals/3/documents/acb_strategy_web_oct2013_en.pdf (In 2009, African, Caribbean, and Black people represented an estimated 19% of people living with HIV in Ontario, with a relative rate of heterosexual HIV acquisition that was 24 times higher than among others infected through heterosexual contact.) 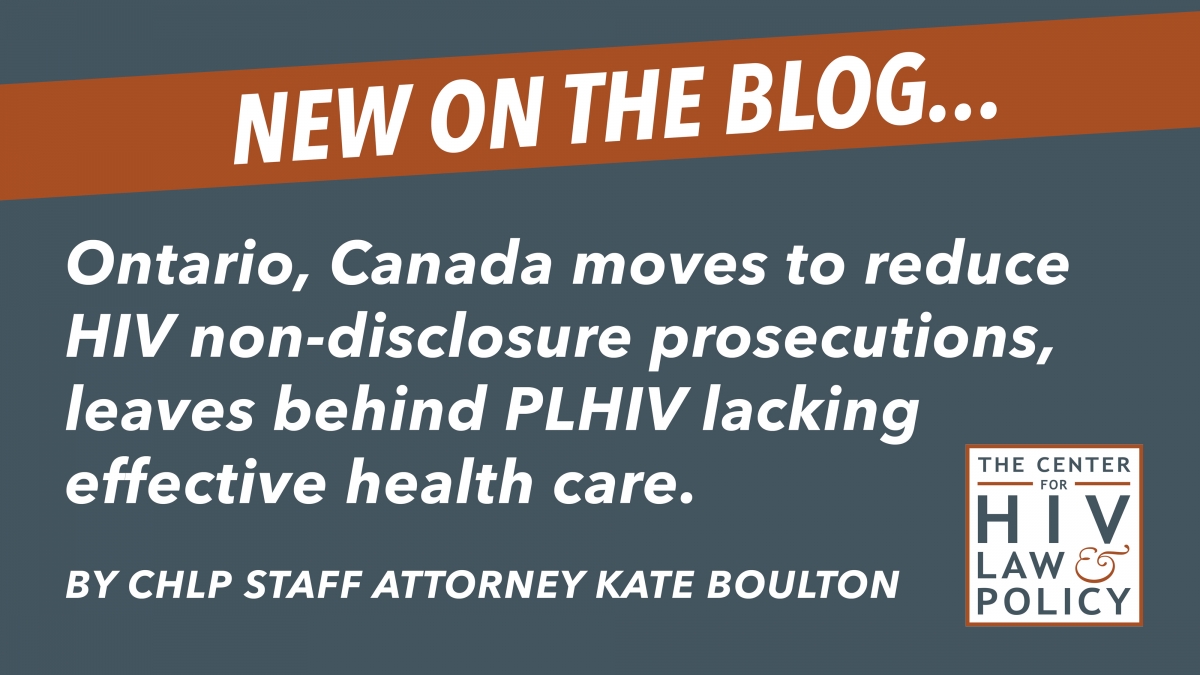