A report from the Williams Institute released earlier this month provides the first comprehensive look at HIV Criminalization in Georgia. Using Criminal History Record Information data from the Georgia Bureau of Investigation from 1988, the year the law was enacted, through September 2017, this report looks at the use and enforcement of Georgia’s HIV-specific criminal offenses—most of which do not require transmission. In the time period analyzed, 543 people between the ages of 14 and 73 were arrested in Georgia for HIV-related offenses, which include:

The study reports on a total 571 HIV-related arrests, only 2 of which involved the “assault with intent to transmit” statute. Thirteen percent of total HIV-related arrests resulted in an HIV-related conviction. Importantly, the data available for analysis only distinguished between the general categories of “reckless conduct” or “assault with intent to transmit,” meaning it was not possible to determine the particular conduct which resulted in the person’s arrest (e.g, sex versus sharing syringes). However, concurrent charges—additional charges for separate crimes at the time of an arrest for an HIV-related offense—provide clues about the overall breakdown.

Patterns in the data show the unequal racial and gendered impacts of HIV Criminalization in Georgia. The data shows that Black men and women are more likely to be arrested for an HIV-related offense than White men and women—this information follows the disparate rates of HIV in Black and White communities in Georgia. In an unexpected finding, White women were shown on the whole to be the group with the greatest disproportionate level of arrests for HIV-related offenses: though White women only comprise 3% of the population in Georgia diagnosed with HIV, they make up 11% of total HIV-related arrests. Following arrest through to conviction, Black men were convicted of HIV-related offenses nearly twice as often as White men.

Disproportionate Harms for Sex Workers and People Who Inject Drugs

In breaking down concurrent offenses, interesting outcomes emerged. Those incidents of HIV-related arrests with concurrent charges for a sex offense (e.g. rape, sexual assault) were more than twice as likely to result in conviction on the HIV-related charge than those without sex offenses. Even more stark, however, was the impact on sex workers. Convictions for an HIV-related charge were three times more likely when the person arrested had a concurrent charge of solicitation/sex work (about 7.25% of total “reckless conduct” charges). Women, particularly Black women, are much more likely to be charged with concurrent sex work incidents than non-sex work HIV-related incidents.

About 13% of all “reckless conduct” charges involved a concurrent drug offense, suggesting those arrests were likely related to the needle-sharing section of that statute.

The data in this report are critical to HIV criminal law reform in Georgia. Many of the resources directed at supporting PLHIV in Georgia are concentrated in the five counties that make up the Atlanta metro area. Arrests and convictions, however, are decidedly not contained to these five counties. There is a clear need to push for more dedicated outreach to rural areas in Georgia and ensure that the movement for HIV criminal law reform includes people living outside of Atlanta.

The data also unmasks troubling trends in both arrests and convictions for HIV-related charges related to race and sex—it is important to take into account which communities are most at risk. Further, the severe and disproportionate impact of HIV-specific statutes on sex workers and people who inject drugs cannot be ignored in the movement for reform in Georgia. Sex workers and people who inject drugs are most often left on the outside of work and advocacy that directly affects them, and the movement for HIV criminal law reform in Georgia can resist this norm. Inclusiveness and intersectional advocacy are critical to the health of the HIV criminal law reform movement, both in Georgia and the growing number of states working towards reform. 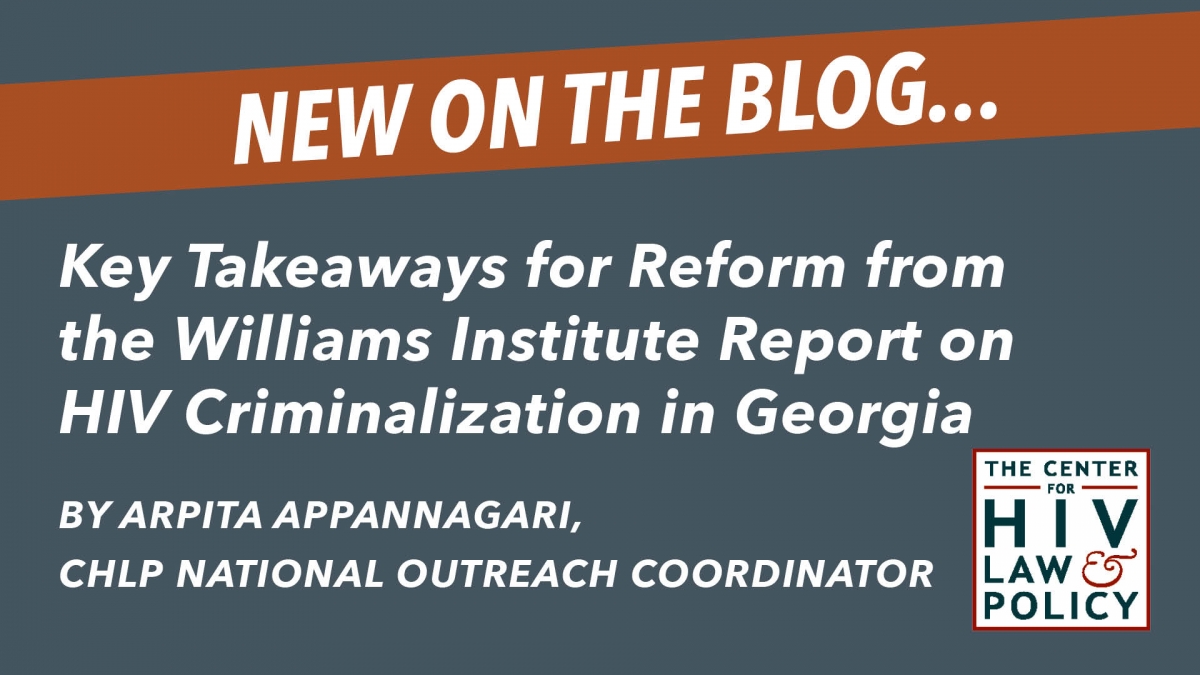