A Moment of Outrage with a Silver Lining

By Catherine Hanssens Executive Director, CHLP
While media attention focused on Price's comments, in December her committee released a final report with surprisingly progressive findings and recommendations based in no small part on the efforts of Georgia advocates who made sure the committee had information about the harms of Georgia’s HIV criminal laws and the need for reform.

A Moment of Outrage with a Silver Lining

Back in October 2017, there was a tsunami of outrage and media coverage in response to comments made by Georgia State Representative Betty Price during a committee hearing on access to HIV care and prevention. In response to testimony about the problem of access to the remarkable health and prevention benefits of current HIV treatment in Georgia, Price queried:

“… [A]re there any methods legally that we could do that would curtail the spread? I don’t want to say the quarantine word, but… It seems to me it’s almost frightening, the number of people who are living that are potentially carriers… with the potential to spread, whereas in the past they died more readily and then at that point they are not posing a risk. So we’ve got a huge population posing a risk if they are not in treatment.”

Even if Price’s comments were, as she later said, posed to provoke discussion, elected officials have no legitimate excuse for suggesting that people living longer with HIV are a public health problem, or that quarantine should ever be on the table.

Unfortunately, the view that sexually active PLHIV need to be “legally” contained is still pretty widely shared, yet rarely gets the press Price’s comments received. Media reports of a prosecutor referring to HIV, a treatable disease, as the equivalent of a “death sentence,” or calling sex while living with HIV the equivalent of pointing a loaded gun at someone’s head have yet to receive the type of outrage leveled at Price. What’s worse, Georgia’s criminal HIV law has effectively quarantined multiple PLHIV through felony convictions for sex without disclosure without any comparable national cry of outrage in response.

Media coverage of the Price controversy glanced over the substance of these hearings and what really should have been the big news—that local HIV advocates assembled an impressive panel of experts to testify about barriers to HIV treatment, including what likely was a first: a representative of the federal Centers for Disease Control and Prevention presenting powerful testimony in support of modernizing Georgia’s HIV criminal law.

And there’s more. Just a few weeks ago, in December 2017, the committee released its Final Report of the Georgia House Study Committee on Georgians’ Barriers to Access to Adequate Health Care. The report’s findings and recommendations are surprisingly progressive, and are based in no small part on the efforts of Georgia advocates who made sure committee members were equipped with information about the harms of Georgia’s HIV criminal laws and the need for reform.

In analyzing HIV care and prevention, the Committee’s report found that “[c]riminal exposure laws had no effect on detectable HIV prevention.” The report’s analysis goes on to echo the Department of Justice’s 2014 recommendation that these laws should be eliminated except in cases where a separate sex offense such as rape and an actual risk of transmission is involved; or when evidence clearly demonstrates that the person acted with the intent to transmit HIV and engaged in behavior significantly likely to do so. The report also cites a 2013 resolution from the Presidential Advisory Council on HIV/AIDS (PACHA), noting the failure of HIV criminal laws “to account for (1) the prevention measures, (2) the reality of disproportionate sentencing that often occurs, and (3) the fact that the laws are based on outdated beliefs about HIV transmission.”

Other highlights from the report’s findings on HIV criminalization include:

“[C]onsider that both prostitution and solicitation of sodomy are misdemeanors under Georgia law when the accused is not infected with HIV. These crimes only become felonies when the accused merely knows they are infected with HIV and fails to disclose their status. Thus, the current [HIV law] falls short by penalizing behavior that does not require the type of intentional behavior for which an enhanced penalty is typically reserved….”

“In Georgia, prosecutions of those infected with HIV whose actions fall under [GA’s HIV criminal law] has not been limited to those code sections. In fact, there are documented cases where the state has pursued charges of aggravated assault against an accused in such situations. This inequitable disparity in prosecution of HIV-infected people should be addressed in any reforms made to these laws.”

“[Because Georgia’s HIV law] criminalizes behavior upon mere knowledge of status, there is fear among those living with HIV of prosecution under this statute when they are victims of a sexual assault involving behaviors outlined in this code section. To curb this fear and empower such victims to report these serious assaults, the law should be clarified to account for these scenarios by explicitly exempting such victims from prosecution.“

In short, a legislative committee in a Southern state that included four Republicans and only one Democrat has issued a report calling for reform of Georgia’s HIV criminal laws so that they are consistent with current scientific knowledge, focus more on intent to transmit rather than knowledge of status, and incorporate recognition of risk reduction measures. In the discussion supporting these recommendations, the committee notes opportunities and shared responsibility for preventing HIV transmission in intimate relationships involving people living with HIV and their HIV negative partners. It highlights the unacceptable disparities in the use of unique liability standards and onerous punishments against people living with HIV; the legitimacy of HIV positive sexual assault survivors’ fear of reporting crimes against them because they know the prosecutorial table could be turned against them; and the inequity of turning a potential misdemeanor into a serious felony when a sex worker is living with HIV.

This is big news and important progress for which Georgia advocates deserve a great deal of credit. The Committee’s findings should also be a call to action for advocates working to modernize these laws across the country. In a challenging political climate, where we see a frustrating lack of outrage among the press and the general public when it comes to HIV criminal laws, outcomes such as this demonstrate that while the substantive work may not grab headlines, it will have a more profound, lasting influence on public health and policy. 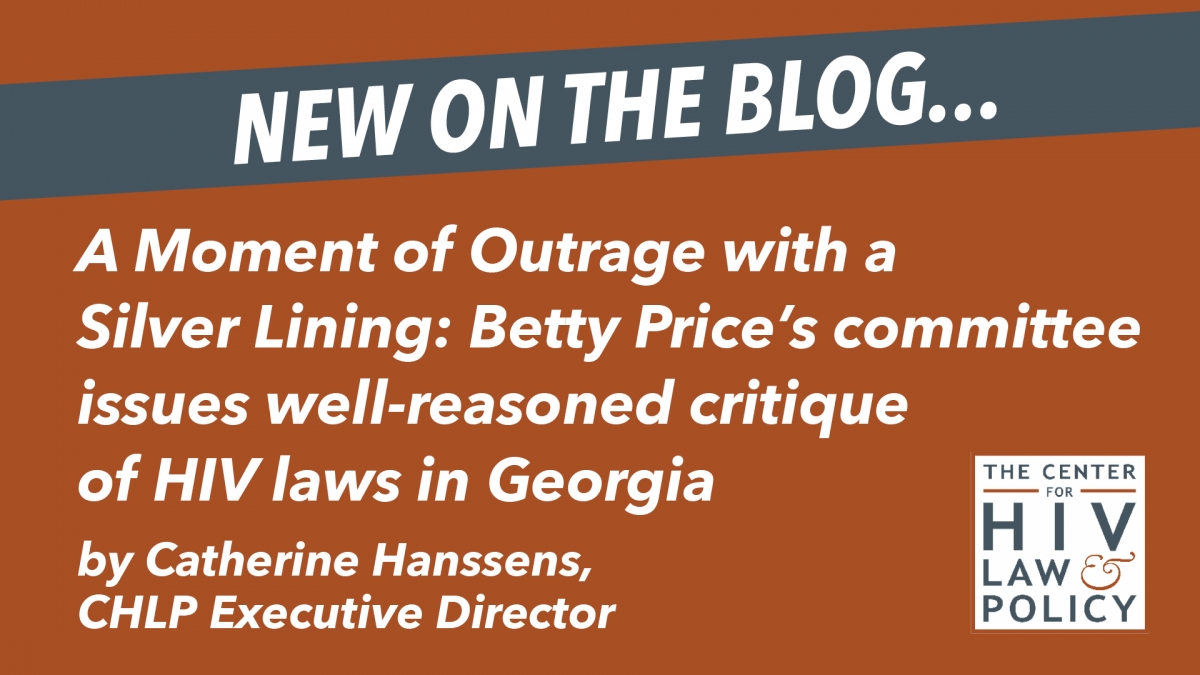